What Are Cali Weed Prerolls?
Cali Weed Prerolls are essentially premade joints from California. Cannabis producers, cultivators, and retailers such as Cali Plug now offer branded prerolls, much to users’ delight. They generally consist of a wrap or paper, ground cannabis, and a filter or crutch lodged firmly at the preroll’s base. Some are sold in individual tubes, while others are packaged together as multi-packs. As varied as the packaging may be, preroll sizing can run from the length of a pinky finger to the length of a smartphone. Prerolls offer consumers a relatively inexpensive, disposable, all-in-one experience that caters to individuals and groups alike.

Why Use Best Pre-rolled Weed Joints?
Cali Weed Prerolls provide consumers with many advantages, from convenience to storability and everything in between. Consider a group of friends looking to hang out together on a Friday night. To enjoy cannabis together, they would need to grind their nugs before loading up a bong or carefully rolling the herb into joints, whatever their delivery method of choice may be. If they were to plan on twaxing their weed (rolling their joint in a ribbon of shatter), they would need to set up a small station with the necessary supplies to prep their bud. This ceremonious ritual is loved by some, but many appreciate the convenience of a preroll.

Prerolls are convenient, come packaged in reusable containers, and range in potency to satisfy even the most discerning of cannabis connoisseurs. They’re surefire heralds of smiles, laughter, and great vibes.

How Efficient Is It, Smoking a Prerolled Joint?
Preroll potency ranges from standalone flower to twaxed cones lacquered in kief; and just as potency varies, so too does flavor. The usage of prerolls allows consumers to experience the power of concentrates without having to vaporize or dab — but how efficient is smoking a joint? How much of the active cannabinoids are actually ingested by your body?

Bluntly put, less than halfway efficient. But that shouldn’t strike them from consideration. Bongs, pipes, and other methods of combustion suffer from similar inefficiencies. A Natural Products Chemistry & Research study published in 2015 found that users typically consume less than half of the available cannabinoids in a joint or preroll. In fact, joint and preroll users only ingest 28% to 46% of the available cannabinoids, with an average of 37% across all experiments. The scientists behind the study concluded that the missing mass of cannabinoids ends up as ash or uninhaled smoke. Though users, on average, may enjoy a third of the available cannabinoids in prerolls, their convenience, inherent discretion, and potency variance makes prerolls a no-brainer for consumers. Despite their inefficiency, prerolls and joints stand together as internationally recognized and celebrated symbols of inclusion. They’re here to stay.

What Are Cannabis Prerolls Made Of?
Preroll contents run the gamut from basic, flower-only joints to king-size cones decked to the nines in kief, wax, and top-shelf bud. Depending upon where the preroll is purchased, such as from a prerolled joint dispensary, users’ mileage may vary.

For years, most prerolls contained varied combinations of shake and dry plant parts, including stems and excess leaves, because producers found that they could drastically save on costs by stuffing their prerolls with products that would otherwise go to waste. As medical cannabis legislation bloomed across the country, more competition entered the scene, which drove quality up and prices down.

Increased competition across marijuana markets has also driven producers to branch out into offering blunts, which are hollowed-out cigars filled with marijuana, and spliffs, which are joints rolled with cannabis and tobacco. Further, the communal preference for joint blunts and spliffs vary geographically. Europeans prefer spliffs, while Americans prefer consuming joints and blunts, and so on. It is worth noting, however, that the European cannabis lexicon flips “spliff” and “joint.” On the continent, spliffs are marijuana-only cigarettes while joints contain both marijuana and tobacco, like a “joint” operation.

Do Best Pre-rolled Weed Joints have a shelf life?
Cannabis does indeed have a shelf life. In keeping with natural processes, cannabis degrades over time. Old, aged cannabis tends to grow mold, and lose its potency and flavor over time, but it takes months. That said, smart packaging and storage can combat this phenomenon to great effect.

How do you extend Pre-rolled Joint Packs shelf life?
As with any form of cannabis, proper storage can greatly extend the preroll’s shelf life. A handful of chief tenets dictate effective cannabis storage: hermetic sealing and humidity, light, and temperature control.

Mason jars are the go-to airtight storage system for most consumers. They’re inexpensive, translucent, and easy to stack and store. They are, however, fragile in nature. For those with deeper pockets, humidity storage containers are an effective alternative. They were engineered to cure and store cannabis, and they come in various sizes, some of which can hold up to two pounds (0.91 kg) of bud.

Controlling humidity is a little more difficult, but humidity storage or other vacuum-sealed containers allow consumers to protect their cannabis from damaging humidity without the hassle of maintaining dehumidifiers.

When it comes to storing, it’s all about location, location, location. Keeping cannabis in a dark and cool location is optimal. Find a spot in a pantry or under the stairs to keep marijuana safe from light and heat, both of which greatly hasten cannabis’ natural degradation.

How to make The Best Pre-rolled Joint
What you will need:

Rolling paper
Filter
Sheat of paper
Pen or pencil
Grinder
½ to 1 gram of cannabis
Chopstick (optional)
The first step to creating your own joint is breaking up your cannabis with a grinder. Ground cannabis burns slowly and evenly, making it a staple in joint creation.

The second step is folding a filter. Filters keep the cannabis out of your mouth and in the joint, protect your lips from charring, and keep the joint from overheating and overburning. Carefully fold the filter paper in a zigzag formation, and when you reach the halfway point and the filter looks like an accordion, roll the remaining straightened filter around the zigzag accordion half to secure everything in place. Be sure not to fold or roll the filter too tightly, otherwise, nothing will make its way through. You can also use other types of filters, such as glass tips.

Once the cannabis is ground and the filter is ready, the third step is shaping the joint. Grab a pen or pencil and gently wrap the rolling paper around its midsection and seal it, like a letter, with saliva. If you choose to use a chopstick to roll the paper, your joint will appear more tapered and cone-like. Once the paper has been rolled into a cylinder or cone, slide the folded filter through one open end until it’s flush with the other. The filter should expand within the rolled paper to create a tight seal.

The final step in the process is pinching and twisting the excess rolling paper into what will essentially function as the joint’s wick.

How to smoke a Pre-rolled Joints From California
Now that you’ve brushed up on your understanding of prerolls, treat yourself to the magnificent joint before you. You don’t need to do anything else but enjoy the preroll as you would a regular joint.

Regular vs. infused prerolls
Prerolls can be either regular or infused joints. Infused prerolls are joints with a concentrate, usually kief or shatter, either in or on the surface. Concentrates are more potent than flowers, so the addition of concentrates increases the overall potency of the joint. Infused preroll joints are a popular choice among experienced cannabis users who have a higher THC tolerance. 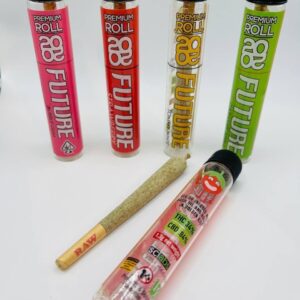 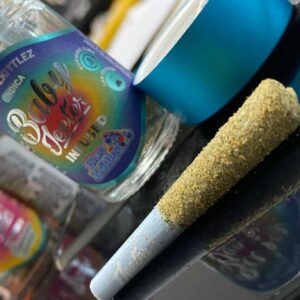 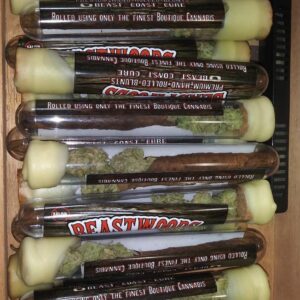 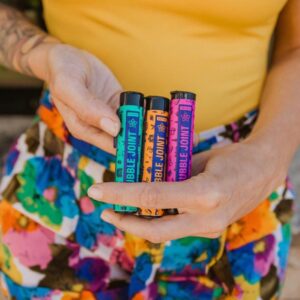 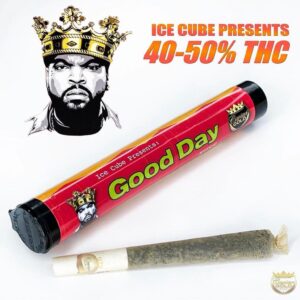 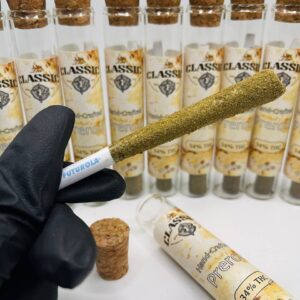 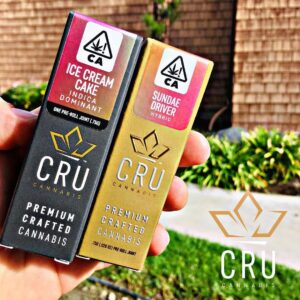 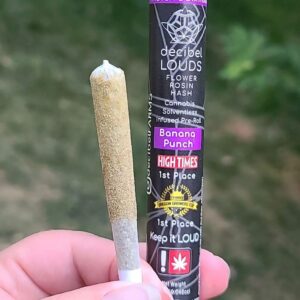 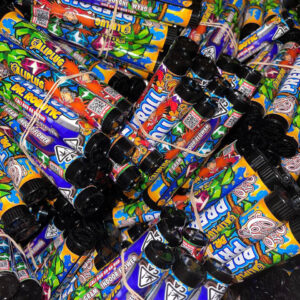 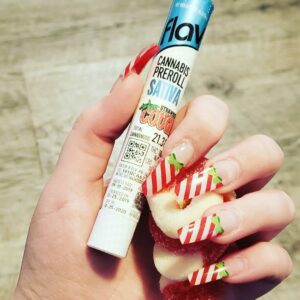 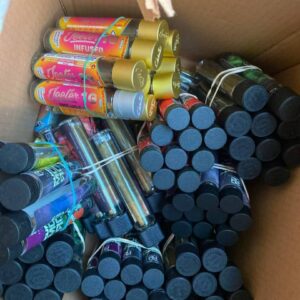 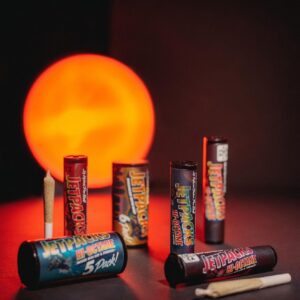